In 1982 Emmanuel Kondok and his family were imprisoned and tortured. His father was killed in captivity and soon after release his brother died of the injuries he’d sustained through torture. Emmanuel’s dramatic escape, alone at 12 years of age, and his arduous journey through eastern Africa afflicted by drought and war is a compelling story of the refugee experience.

I was born in Twic County in the Warrap State in South Sudan. My family were farmers, my father a community leader and a spiritual leader through heredity.  In 1982 as we were on our way to market to sell produce we were intercepted by Government forces and imprisoned. My father was accused of conspiring with the rebel army.

The whole family were imprisoned in the local Garrison and tortured. Each day I was sent down to the river to wash the vehicles of the Government forces. On one of these occasions a stranger helped me to escape by swimming across the river. [This first episode in Emmanuel’s escape must have been a harrowing event, more so when you consider it happened at age 12.  – scribblehead] I had to cross a broad running river swimming underwater holding my breath, knowing that if I surfaced I would have been shot by the soldiers guarding me.

Reaching the other side I was on my own, afraid for my family but compelled by the will to survive. I was picked up by some strangers and joined them as they fled our homeland for Ethiopia. In the three months after my escape my father was assassinated while in captivity before the rest of my family was released. A further three months later my brother was also dead as a result of the injuries he’d sustained through torture.

The same three months my family remained in captivity, tortured and my father killed, I spent walking to Ethiopia with this band of asylum seekers. The three month walk to Ethiopia was arduous, the countryside laid waste by drought, famine and war. There was no food and no water. People had to eat what they could find in the bush, and drink their own urine. Many perished.

Surviving to reach Ethiopia, I was sent to the Pinyudo Refugee camp where I lived alongside hundreds of thousands of refugees who’d fled the brutal war. I was able to receive some schooling while at Pinyudo. However life in the refugee camp was far from ideal. At times there was as little as 400 grams of food per day.

In 1991 after a change of government in Ethiopia the South Sudanese refugees were forced to return home. Another perilous journey. I remember many people dying as they tried to cross the Gilo River. We lived again not only with constant thirst and hunger, but with the fear of wild animals. Some of those who perished were taken by lion or hyena.

Back in South Sudan I lived in the town of Panchalla on the border with Ethiopia. The Red Cross entered the town with food, water, medical aid and shelter. The aid was short lived however, as after three months the Sudanese army attacked the town, and I was forced to flee for my life yet again. The situation in South Sudan and throughout Sudan was still very dangerous, so I made my way down to Kenya, again seeking asylum from the conflict that was raging in my homeland.

When I arrived in Kenya the UNHCR received us and we were sent to the Kakuma Refugee Camp. It was while in Kakuma in 1995 I met and married my wife, Mrs Aluel Deng Piyom.

The conditions in Kakuma were also not ideal, there was often fighting between the locals and refugees, but I still found the opportunity to go to school, and I was able to finish my Secondary Schooling in 1997. Going to school was important. I learnt a lot about the world, and gained more and more knowledge about the bad things within it.

I became a Youth Leader in the camp, working with the Catholic Mission to organise social activities and teaching the children, and also with UNICEF helping to distribute school materials and teaching farming practices. I also worked with different non – government organisations advocating peace in South Sudan and Sudan.

In 2005, twenty-three years after I first fled my homeland seeking asylum, the Australian government accepted me and I moved to Sydney with my wife and two children. When I arrived in Australia I soon found a job in a fruit packing factory. I worked there for four years. I now work to support African communities living in Western Sydney.

My expectations in coming to Australia were that it would be peaceful, and that my children would be able to go school, to learn English, and to mingle with Australian children.

Learning English was difficult, and I also do miss my family in South Sudan. I know I have had a good life here; electricity, public transport and comfortable home. I also know that in Southern Sudan people are still suffering. I’m nowadays working very hard to see that other Southern Sudanese, especially children, will have the capacity to grow, just as I have had the opportunity to do.

In Australia I’ve worked hard to continue my education. I received an Advanced Diploma of Human Resources & Management from Granville TAFE in 2011. I also finished the Diploma of Management with Careers Australia, and I currently study for a Bachelor of Applied Business Management with University of Ballarat.

I founded the Southern Hope Community Organisation Incorporated (SHCO) in 2010, a charitable registered not-for-profit organisation providing help and support to Southern Sudanese African Australians. We provide support to widows, orphans, isolated community members and individuals who cannot do things due to disability.

The SHCO mission is to prepare South Sudanese immigrants residing in Australia to become productive citizens by providing a work and learning environment where they feel challenged, respected & accountable as they strive to meet the demands of citizenship. Our aim is to improve the lives of South Sudanese families and support their smooth integration into Australian life and local Community.

I would say to Australian a big thank you for what you have done for opening the door to refugees from all over the world. 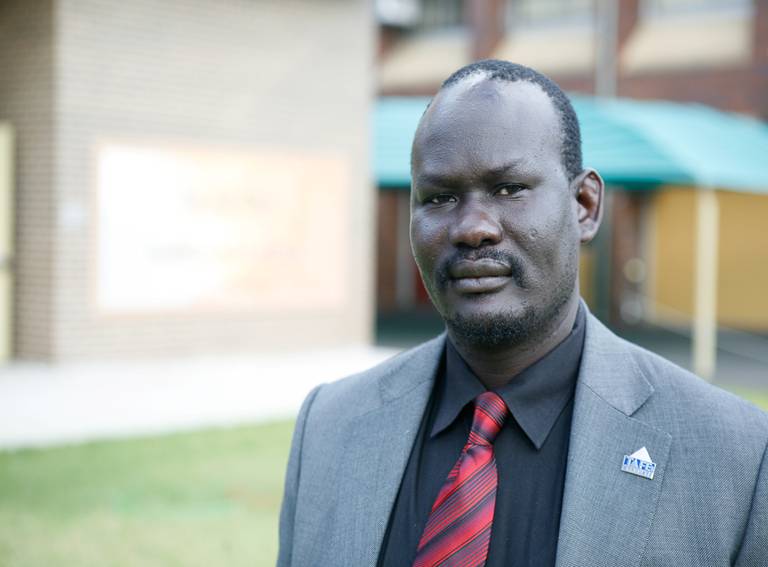 Emmanuel Kondok works to help South Sudanese to get on their feet and find their place in a peaceful Australia after so many of them have suffered from the type of traumatic experiences he did.

From the age of 12 Emmanuel endured hardships no child should ever experience. He now works to ensure a better life for Southern Sudanese both in Australia and back in Africa, and also to raise awareness of the issues facing South Sudanese. On the occasion of my 44th birthday what I wish is that Emmanuel’s children never suffer from the intolerance toward refugees that so many in our community like to express, enflamed by our profligate mass media and our defective political leaders, and which has at its root the same evil that infected the hearts of those who forced Emmanuel to endure what he did. My birthday wish is that Emmanuel and his family find peace here, that his children go to school and learn about the good that is in the world, and that he and his children mingle with Australians, where their different origins are respected and appreciated, and among whom they will each be accepted as one of our own. – Scribblehead