We sometimes think we live in a time of immense and rapid change, but often we’re thinking in terms of gizmos, or the variety of stuff we can buy.

Nan was born in the depths of the Great Depression, when unemployment, homelessness and hunger were common. Australia as a nation was less than 30 years old. God Save the King was our national anthem, and our flag would not be the official Australian flag for another twenty-four years. Canberra hadn’t yet been officially named. The last convict transportees had been shipped to Australia less than a lifetime earlier. Cars were only beginning to come into widespread use, horses played a practical part in everyday lives. ANZAC Day marches were a recent idea, and the participants were all First World War veterans, many of them still young men. Even a roof over your head didn’t guarantee you more than a dirt floor. Her own family lived on what they could grow in their garden and the rabbits her father trapped. Australians divided themselves vividly between Catholic and Protestant. In parts of Australia, Aborigines continued lifestyles that had existed since our European ancestors lived in caves.  The bodyline cricket season hadn’t yet been played.

People don’t just live through transition, they’re active participants. They’re responsible for it. It’s people like Nan who brought us from that – to where we are today.

World War II happened during a formative part of Nan’s life, and while it brought austerity to all and terrible sacrifice and loss to many families around Australia, it also brought violence to her own home town. We can’t imagine the terror experienced by a 14 year old girl when more than 1100 escapees were on the loose after the Cowra Breakout. 231 Japanese and 4 Australian soldiers were killed in or around her home town. Real terror of the type we entertain ourselves with in movies, books, TV and computer games nowadays. It was real and she lived it.

The post-war decades saw incredible growth and prosperity for Australia. Modern homes, a car for every family, refrigerators, leisure time, and jobs that could pay for it all – these things only became a reality in Nan’s lifetime. To come from The Depression to that, filled people with optimism. For a long time it was possible to believe the future could only keep getting bigger and brighter, and this no doubt influenced Nan’s outlook. The first decades of her married life were dynamic – moves from Cowra, to Forbes, Dubbo, Cessnock, the Central Coast, and finally to Canberra, the birth of 11 children, and by the late 60s – grandchildren.

The world was changing in big ways. Nan’s daughters were liberated and this meant greater participation in the workforce in the days before the child care system we have today. Nan played a part in raising my sister Lesa, my cousin Dana and I. We were only the first of many of her grandchildren in whose life she played a practical everyday part. It was often only through Nan’s support her daughters were able to participate in work, and that has a lot to do with the prosperity we as descendants and as a society enjoy today. It’s only in recent years people have begun to think about the value of this unpaid domestic work to our economy. But let me tell you – the contribution Nan made was immeasurable.

To my knowledge, apart from one special exception, Nan is survived by all her descendants – children, grandchildren, great-grandchildren and now great-great-grandchildren – eighty-five or six of us in all. From where we sit today it’s easy to overlook how extraordinary this is. When Nan was born, and for every generation before her, mortality rates and life expectancy made such an achievement unthinkable. Incredible change and it was achieved by the people of her lifetime. We might picture some character in a lab-coat, fiddling test-tubes to come up with a vaccine for polio, or new antibiotics, and these things did happen in Nan’s lifetime. However, it’s not just improved ideas in medicine, hygiene, nutrition and safety – it’s how we respond to them, and how we put them into practice. How we become the change. Its Nan’s child-rearing that got us here, and by the example she passed on to her children.

Being so numerous, the people of Australia owe us all a tremendous debt for occupying so much of Nan’s time and energy. Imagine if she’d been free for to pursue her other great interests, such as politics? Nobody here could doubt that she’d have forced her way to the front of the pack. It would be totalitarian, and tens of thousands more Australians would have got their back-sides smacked by Nan’s wooden spoon.

If I told you that Mary Anastacia Norton was a timid person, who liked to keep her opinions to herself, you’d say – “This bloke’s turned up at the wrong funeral.”

Here’s the thing – Mothers Have Opinions! It’s practically the job description. From the day we’re born, mothers have an opinion on every aspect of our lives. Sometimes that brings us into conflict with them.  Mothers are our checks and balances. Mothers and their input keep us true, cause us to look at ourselves, and whether we adjust ourselves according to their views, or we use them to reinforce our own divergent ones, it makes us who we are. When we disagree, that is simply independence.

Every time I saw Nan she’d repeat some old anecdotes about me. How many of us had that experience – rolling our eyes and thinking – ‘here we go again.’ Mostly they were benign – “Remember that time you got your head stuck between the railings on my front step? ” “Remember the time you kids were smoking under the house?” Others would cause you to cringe – reminders of your own limitations, and more importantly – that she knew them.  Last time I saw her there were none of this second type, only fond memories. It was a sign. In her last days all those transgressions were forgotten. That’s a message you can all take away from here today – All Is Resolved.

In a long life there are ups and downs. One constant through all Nan’s life was her friendship with Valda Harper. Friends since they were tiny, Valda was Nan’s bridesmaid. Through all the years, Nan cherished the twice-yearly phone calls on each of their birthdays. Thank you, Valda, for a loyal friendship that made her life so much richer.

One of Nan’s most treasured mementos was the medal awarded to her grandfather, Alf Munz, by the people of Murrumbidgerie, present day Wongarbon near Dubbo, in recognition of his service during the Boer War. This was a source of tremendous pride for Nan. The Boer War is linked in time with Australia’s Federation, our first foray onto the world stage as a nation in our own right – and her own grandfather was part of it. Son of German migrants, by the time of World War 1, Alf found himself labelled “Mun the Hun”, Nan used to say. Nan was not immune to the lessons of her forebears.

One of the greatest experiences of Nan’s life was her visit to Ireland, where she travelled to the places where many of her ancestors originated. The absolute thrill that trip gave her, and the joy it brought her to reminisce about it forever after. Special thanks go to my uncle Glenn for making that possible.

A long and eventful life is not without tragedy. The tragic loss of her brother Jimmy in 1971, a young man with a young family, never left her. Nan cared for her own mother, Maggie, through illness during the last years of her life. Nan keenly felt the heart-break and suffering her mother endured. The scars of these two losses were never too far from the surface. Another tragedy of Nan’s life was the loss of her home and business during the recession of the early 90s. It was a terrible injustice and one can only imagine how powerless it left her feeling, as it must have seemed like all those years of growing prosperity suddenly fell away irretrievably. Though in time she recovered from each, experiences like these alter a person, leaving you never quite the same again.

Nan always left an impact so it was true to form of her to ‘check-out’ on Christmas day. She made sure the day of her passing wouldn’t be forgotten. At least she had the courtesy to wait till the end of the day so we all got a chance to enjoy Christmas with our families.

I was very fortunate to see Nan a couple of times during her final days. That first time I saw her in the hospital I was shocked by how frail she looked. I returned the next day and she was much brighter – she’d had a good sleep. Despite her frailty, in her final days she was more positive and she had greater clarity than I had seen in a long time.

We comfort ourselves in the knowledge that Nan’s journey has ended. Her illness in recent years had left her very dependent on others. There are some types of support in your frailty that you simply don’t want to burden others with, and yet it just happens that way, it’s not like we have a choice. Nan was especially thankful to my cousin Chloe for being there. I know that Chloe, for her part, wouldn’t have thought twice about taking care of Nan.  She was part of Nan, and Nan was part of her. Special thanks to Nan’s nurse, Karen, affectionately known as number 12, whose service went beyond the call of duty. Thanks also to Anne-Maree and Lorraine for nursing and for cleaning.

Most of all, our greatest debt of gratitude is to my grandfather, Ron Norton.  Pop, without you, in recent years where would she have been? For the past 65 years for that matter. You have been the dutiful husband. In sickness and in health you were there, and now in your grief you go beyond. We’re here for you.

One of the happiest things I saw in recent times was an incredible love and devotion between Nan and Pop. It was really inspiring to see them so close and loving in her final days, in a way I have never seen before. Very, very touching.

The last time I saw Nan, like always her conversation included bits of news about her children, grandchildren, great grandchildren and great-great grandchildren. She was always aware of every one of us, what was going on in our lives. She felt our losses and took pride in our achievements.  I thought about her own personal losses I mentioned before and how in time she recovered. When I think about her 85 or 86 descendants and look around at many of them today I realise why. You see, you are her greatest achievement. You are her life’s work. 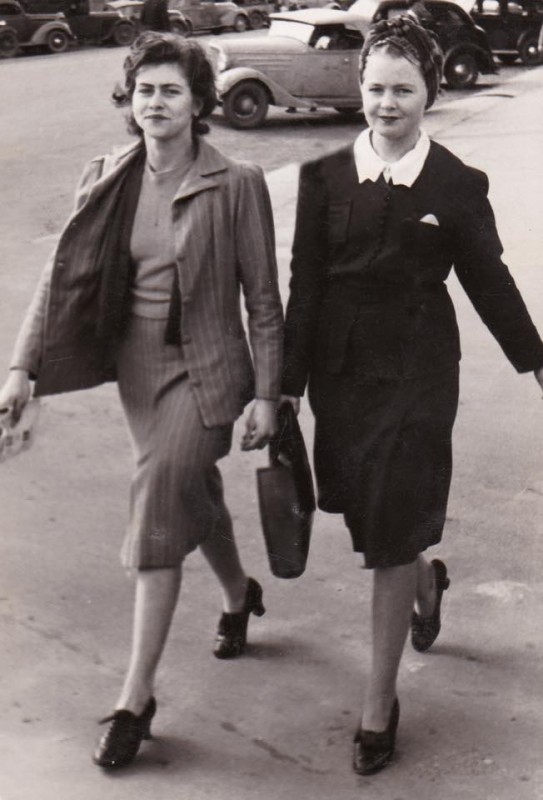 My grandmother, Mary Anastacia Norton, known as “Molly” on the right, with lifelong friend Valda Harper on the left.